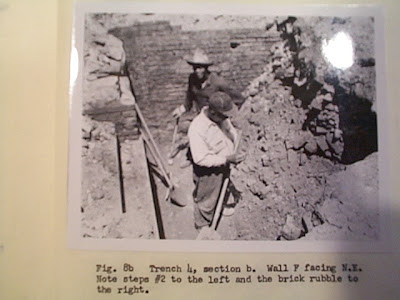 A long missing piece of the Franklin house rediscovery story was finally found this past week. While processing a folder in the Central Files a letter was discovered that lists the names of the four men who assisted NPS Archaeologist Paul J.F. Schumacher in locating and identifying the Franklin mansion ruins....Willie Ransom, Odell Sample, George David, and Wilson Bachus!

(Above) Photographs depicting members of the field crew that located Franklin's house ruins are glued into Schumacher's report (1956:8) entitled "Preliminary Exploration of Franklin Court Archeological Project No. 4, May-Sept. 1953.
Abstracted portion of a 1953 letter (Schumacher to Noonan, May 19, 1953) listing the names of the field crew.
Identifying these individuals has been a concern of mine since 2003, when I learned of their participation in the excavation during research conducted for the Benjamin Franklin Tercentenary Consortium (Jeppson 2005). The very first day of that project turned up eight black and white photographs (archaeological site record shots) glued into a preliminary site report written by Schumacher in 1956. These photographs revealed that the field crew who relocated the Franklin house ruins were African American -- something not commonly known today.
The role these men played in the excavation was explained by a contract typed on onion skin paper found in the files alongside the 1956 report. Entitled, "Estimate for Excavation of Benjamin Franklin's Court to locate and record all walls which may give us clues as to the location of Benjamin Franklin's home" (Schumacher 1953a), this document also provided the pay scale for an Archaeologist (GS-9 at $422 per month) and "6 laborers...if at union wages...$1.75 per hour" --along with a recommendation for employing workers from Local 57, the Laborer's International Union which is a construction and industry or building trades union (Schumacher 1953a:1). Schumacher's field notes (1953b), also stored in the Archives, report on the first day of excavation (in May 1953) that four laborers were hired from the union at this pay. 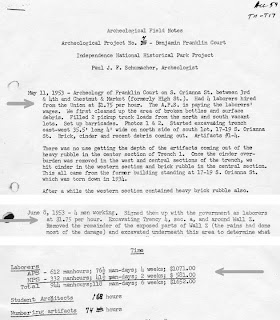 (Top) Schumacher's 1953 typed field notes, page 1. (Middle) The field notes for this date document that when APS funding ran out, the union workers were hired by NPS. (Bottom) Schumacher's field notes are presumably typed up from his handwritten draft after the fact, as attested to by this summary of hours on the last page of the notes.

Secondary research on the history of Franklin Court's discovery undertaken in 2005 provided some context for this labor history finding that the archaeological labor wage paid to Ransom and the others was $1 higher than the then current minimum wage (Jeppson 2007). (The National Average Wage Index for 1953 was $3140, the Median Wage Index for a family was $4100, and the minimum wage was .75 cents an hour.) Wage data for the period also reveals that Black households in the Northern states have two-times the income of those in the South (US Census Bureau Historical Income Table P-53 2004; Full time employee annual wage 1953). Union membership among Blacks in Philadelphia is presumably partly responsible for the higher Northern incomes.

But while the materials in the archaeological documents collection included photographs of, and employment details about, these men, their names remained unidentified --until now. The only hints came from a field note entry dated May 26, 1953, but the notation wasn't clear as to whether monikers or surnames were being referenced: "It poured...two men showed up (Ransom and Sample)".

So now the names of the co-rediscoverers of Franklin's mansion are known! The letter found this week in the Central Files was written May 19, 1953 and is from Schumacher to the Assistant Secretary of the American Philosophical Society (Schumacher 1956c). It summarizes the wages for the field crew -- and in doing so, identifies them by name!