What is old is new again! 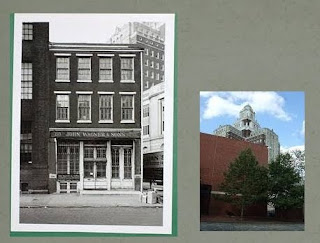 Several memo's, photographs, and reports created during the earliest years of Independence Park's development have become lost to institutional memory due both to the passage of time and because the reporting route 'up the chain of command' in earlier years directed some archaeological materials to the Central Files (as opposed to the Archaeological Records Collection).

One case in point is a 1957 report detailing a short exploratory archaeological excavation conducted in the basement of the John Wagner Building that once stood at 233 Dock Street. (Left image above). This early archaeological excavation involved testing at the bottom of the basement steps of the building after it was vacated, prior to its demolition as part of the making of the Park. In this space, the first Independence Visitors Center was built in 1976 (see the 2009 photo, above right, of the southeast wing of the building).

Thirty years later, after the new Visitors Center was built at 5th and Market, the old building came to serve as the Independence Living History Center housing the Public Archeology Lab and the Independence Park Institute's educational classrooms. Over the past five years, tens of thousands of people have visited the Lab to see how history is learned from the Park's archaeological artifacts. 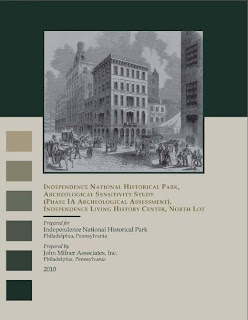 Now this piece of land containing the old Visitors Center is being decommissioned from the National Park Service in a land-swap with the American Revolution Center. The early 1957 report is newly relevant because the Programmatic Agreement and Notice of Realty Action associated with this land transfer requires an archaeological study to assess the potential for cultural resources. The 1957 report was called upon in preparing this assessment. (See the cover image of the report above.) This early archaeological study took place on a property lot directly adjacent to the land now being swapped.

At the time of its creation in 1957, the archeological report concluded that little of significance was found and, given the mission of the Park and the interpretive themes of the day, this was true. Today, with the maturation of historical archaeology as a disciplinary study and the evolution of American History understanding in general, this report's minor findings have new importance. While information about notable personages was not forthcoming (an early research focus), there was evidence of a basement from a previously dating structure still found surviving two feet under the floor of the (later) 19th century, Wagner Building's basement. There was also information relevant to the course of Dock Creek and the artifact assemblage included numerous cow horn pieces indicative of the types of trades (slaughter houses, soap makers and tanners) known to have bordered the waterway during the early decades of the city.

This information was less important for the Park needs as they existed almost 40 years ago but these early findings today are useful for assessing what evidence might possibly survive the ravages of time as the property developed. Today we look back at this and other reports and see that it was clear from early on that 19th century cellars did not obliterate all earlier 18th century evidence. We also see evidence related to everyday life of 'We the People' at the time of the birth of the nation.

Importantly, we also have insight into how restricted in scope some early Park archaeological studies sometimes were. In the case of the Wagner Building excavation, the testing was done at the foot of the basement stairs where natural light remained available --because there was no longer any electricity in the building. This limitation is important to take into account today as archaeologists use earlier research findings to assess cultural resource sensitivity in park planning. Knowing what conditioned those 'peeks into the ground' is therefore critical. 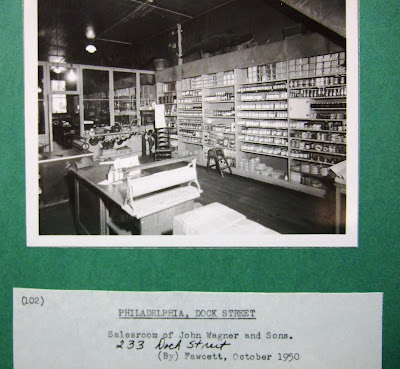 anish and French wines, and spices and tea from the East which came into the docks of Philadelphia and which the firm then often delivered to hinterland customers via pony express (Wagner Gourmet Foods, Inc. 1997).

In 1950, in preparation for building Independence Park, the National Park Service took photographs of the interior of the Wagner building prior to the buildings acquisition and dem 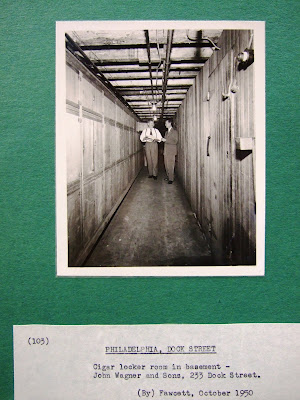 olition. These photos of the John Wagner & Sons salesroom and humidor are on file in the Independence Park Archive's Photographic Study Collection.

ExplorePAHistory.com provides details about the Wagner Museum in Ivyland, PA which is dedicated to the history of the John Wagner & Sons firm.

B. Bruce Powell
1957 Exploratory Excavation in the Basement of the John Wagner Building. On file, Independence Park Archives.