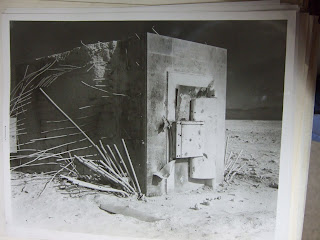 Recent discoveries in the Archives at Independence National Historical Park include evidence related to an important period in American history – the almost five decades of military tension and economic and political hostilities (later 1940s-early 1990s) waged between the U.S. and the U.S.S.R. and their affiliated allies and satellite states that is known as 'the Cold War'. Among its many impacts, this period of history left an important cultural landscape in the United States, including, it appears, a possible Cold War archaeology component at Independence National Historical Park.

Letters, reports, and photographs in the Central Files record the government’s concern for protecting the nation’s cultural icons in the event of an atomic or nuclear bomb attack. These archived documents include calls for action as well as background studies generated for possible implementation. Anything made or modified within Independence Park in response to such measures that in turn left an archaeological trace might now comprise a cultural resource. Such archaeological evidence might also be relevant for evaluation for the National Register of Historic Places’ inventory of Cold War Resources, 1945-1989 . If so, this would mean that this archival project has identified possible new archaeological sites heretofore unknown (archaeologically) and now relevant ‘due to the passage of time’. At a minimum, this archives project has assisted the park in its archaeological management objectives.

Some brief background on Cold War Archaeology:
While a relatively new topic of focus within historical archaeology, this is a fascinating and active area of research. Teams of researchers have been recording a vast range of Cold War related sites, monuments, and installations. This work has been undertaken mostly in the US and the UK, but examples from other areas exist as well (for example, a Swedish-Cuban research project at a base in the Cuban countryside). The artifacts and cultural landscape modifications left from this recent past include monitoring posts, radar sites, missile testing grounds, airfields, communication networks, command bunkers, test ranges, space objects, as well as the protest camps created by those opposed to the era’s military developments. All these reflect an unprecedented spending on defense, a worldview characterized by fear (including the threat of nuclear annihilation)—and a range of responses designed to neutralize that fear.

In the US, much of this archaeology has been part of the Department of Defense Legacy Resource Management Program and the findings are the result of cultural inventory studies. In the UK this research has been primarily university-based academic research.

Independence Park and the Cold War
Among the materials related to this topic that are stored in the Independence Park Archives are the contents in the Central Files filed under Archeological and Historic Structures. Included are newspaper clippings, letters, proposals, and photographs – all cultural artifacts of the Park’s Cold War experience. Here below is one example -- a 1956 Philadelphia Inquirer article reporting that the Philadelphia Civil Defense Council’s Executive Director called for a vault to protect the Liberty Bell from an H-Bomb. 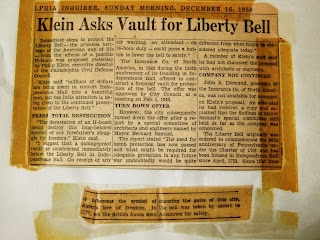 The files in the Archives reveal that various options for a vault were considered but not followed through on -- although a brief conversation with INHP historian Anne Coxie TooGood indicates that an initial effort was undertaken for at least one of these options. This information suggests that, at the very least, there could be some archaeological evidence in-situ, namely soil stains produced from bore corings that tested the ground down to 30 feet below the surface.

The processing work that comprises this archival project identifies those materials needing conservation and other attention --such as the the fifty three year-old page above bearing a taped newspaper article, or the above photograph which has now been tagged for relocation to a photo storage area. The processing is also identifying archaeologically relevant materials not regularly catalogued as part of the archaeological records collection. In this case, the project has identified evidence related to the cultural landscape of the recent past, and identified information relevant to archaeology's contribution to understanding and preserving resources related to the Cold War.