Roots That Time Has Redefined 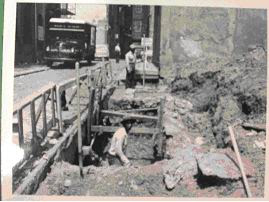 Before there was an Independence National Historical Park there was archaeological research undertaken for what was to become the park. The first work (depicted above in an archived report) was conducted just over fifty years ago at the site of Benjamin Franklin’s Philadelphia mansion by the American Philosophical Society (APS) and the National Park Service (NPS).

At that time, APS undertook the excavation both as a memorial tribute to their founder (Franklin) on the 250th anniversary of his birth and as a research endeavor not unlike the expeditions APS sponsored, a half century earlier, that fostered Americanist Archaeology in its incipient period. NPS interest in the house site served the needs of the Master Plan for a national shrine to democracy (the soon to be Independence National Historical Park) which would include a park unit dedicated to local Philadelphia history and, in particular, to Franklin.

This past month I have been processing early archaeology-related administrative files in the Park Archives. In this collection I have come across what is likely the first time a recommendation is made regarding the state of the archaeological evidence buried below the city streets. It is a recommendation in a report detailing the results of the first episode of work at Franklin Court. It is written by Paul Schumacher, the archaeologist in charge of the 1953 and 1955 excavations at the site of Franklin’s mansion:
“It may well be that any future archeology of Old Philadelphia would give the best results by merely excavating underneath sidewalks and smaller streets or alleys. The properties where modern structures have been razed are very poor for archeology because of the deep basements these buildings usually had….” 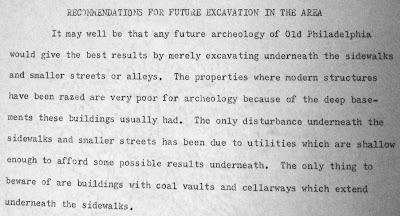 I was already familiar with this report from earlier research on
Franklin-related archaeology that I conducted for the Benjamin Franklin Tercentenary Consortium (work commissioned as part of the federal celebrations to honor Franklin on the 300th anniversary of his birth in 2006). But coming across Schumacher’s report again in the Central Files –where they are evidence of park administrative history related to archaeology --made me see the report’s recommendations with a slightly different set of eyes.
I undoubtedly also saw this documentation differently today because of the recent understandings about urban historical archaeology gleaned from the excavation of the President’s House site in 2007. That recent park research revealed that the basements of nineteenth century buildings do not necessarily entirely obliterate the evidence of the colonial period landscape. This surprise finding in the case of the President’s House site has led to a rethinking about Independence Park's archaeological resources --namely, that the archaeological evidence can survive the ravages of time more than archaeologists thought it could.
But why was this survivability ever in doubt? The documents in the Central Files reveal that this (now often erroneous) assumption appears in the earliest days of the park’s creation when, in 1956, archaeologist Schumacher reports up the administrative chain-of-command with recommendations for future excavation in Old Philadelphia. Schumacher posits a logical conclusion at the time given the circumstances (the earliest excavation) but his recommendation reflected only limited exposure to the archaeological record in-situ (as it appears in the ground).
Schumacher was excavating an unusual example for colonial Philadelphia archaeology. The Franklin house was located in the middle of a city block. Deep basements are usually on the outside edges of the block along the streets but, in this case, a small street bisecting the block was built over top of the (razed) Franklin house remains. Nearly all of the foundation walls for Franklin’s house remained unimpacted by the street construction and by the two rows of homes that lined this street. Schumacher did explore parts of the adjacent house lots and one can only surmise that he is hypothesizing what might remain under the 19th century structures as he and the excavation team were not tasked with finding anything other than the Franklin ruins and were involved in following out the foundation walls that were encountered (leaving other areas largely unexcavated). The most relevant sought after discoveries at the time happened to be found under the street and sidewalks where their survival rate was very high.
In a future post I will report on other documents in the archive that show how this early recommendation transforms into a baseline assumption that holds for 50 years of Park development and management --until 2007 and the President’s House findings.
One note: It was likewise long assumed that archaeological evidence of the Native American experience was obliterated by the development of the city. In past decades, when archaeological artifacts were encountered during excavations they were considered to be 'out of context' (removed from their original place and time of deposit/use by subsequent city buildings). It is now understood, in part from the National Constitution Center excavations in Independence Park, that evidence related to the Native American past can be found in intact archaeological deposits in the city. For more on this change in thinking see the brilliant, online presentation, Native American Sites in the City of Philadelphia: Elusive but not gone. This web offering was created by archaeologist Doug Mooney and it is archived at the web site of the Philadelphia Archaeological Forum.


INHP Archive materials used in the preparation of this posting: