Great News! Jackson Ward "Smokey" Moore Jr., has emailed with some recollections about the early use of electrolysis and ultrasonic cleaning methods at INDE...
Smokey is an archaeologist whose work at Independence Park almost four decades ago was the focus of a previous posting. His rememberances clarify and deepen our understanding of the history of archaeological practice in Independence Park, in NPS (the federal agency), in the subdiscipline of historical archaeology, and in archaeology in general. 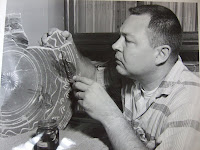 NPS Public Affairs photo of Jackson Ward 'Smokey' Moore Jr.
in the archeology lab in the Second Bank, circa 1960.
I couldn't be more pleased about this! I had high hopes that this blogging project would operate collaboratively. We have now had instructive commentary and invaluable suggestions from a museum curator, a Pennsylvania-based archaeologist, an archivist from the city, a tour guide specialist, and various members of the interested public -- each of whom has helped to inform this INDE Archives Finding Aid project. Now we are fortunate to hear from someone who helped create the materials that comprise the INDE Archeological Records Collection. He is a wonderful writer to boot!
Smokey has given his permission for this correspondence to be treated as oral history so it too will be preserved as part of the INDE archaeological records collection. The following are excerpts from his correspondence (edited to the topic of archeological lab methods).
Jackson Ward "Smokey" Moore writing to V-I-P Patrice L. Jeppson on Aug. 7th, 2009:

The letter about my magic machine from San Francisco was probably from Paul J.F. Schumacher. He was referring to the electrolysis set up. I introduced it to INDE but it wasn't my idea. At Fort Fredericka NM Joel and I had a lab assistant named Bob Taylor. We had been cleaning iron artifacts by heating them in a pot-bellied stove, dunking them and pounding the crusts off, followed by brass and/or steel brushing. Then we would coat them oil to minimize rusting. After Joel left, I got down a copy of Plenderlieth's volume on museum object treatment. I saw a very complex arrangement of electrical equipment that Plenderlieth used for metal objects. Shaking my head I showed it to Bob. Bob was an island man, part of Cap'n Taylor's clan [deleted bio data] whose background was shrimpboating. After about 15 minutes he turned me and exclaimed "Hell, Cap'n, that ain't nothin but a gussied up batt'ry charger!". He also believed that sodium hydroxide was "plain ole lye." I got the stuff and we used a small aquarium tank to clamp the anodes to. It worked beautifully! I sent one of those [NPS] forms to credit Bob. I think Stan South was fielding those then. A downside-- I'm not sure I didn't uffer some detriment from the gas that the process gave off. [sic ;) ? ]

The Ultrasonic Cleaner was Bruce's [B.B. Powell] introduction. It was great for encrusted button and ceramics and other materials. It worked on small metallic objects too. We had to pare down our expectations for many metal objects though: the transducers sometimes broke! It's hard to recapture exact scenes so I don't remember how well we coped with continuing to use process. Maybe Bruce remembers. 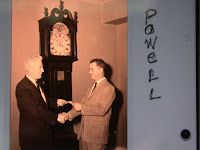 On August 13th, Smokey added:
...My discussion of the ultrasonic device [in the last email communication excerpted above] was in terms of the circumstances that then prevailed. Our appliance was quite small; I would guess about 8"x11" at most. (Bruce may remember it differently). I haven't kept up those babies. I have seen the ones jewelers use to clean diamond rings, and my Braun 7800 electric razor's head cleaner is a mini ultrason. When I saw the illustration in your blog of the ultrasons used today, I realized that the puny tasks we required then would be pieces of cake. now.

Posted by V-I-P Archaeologist (Patrice L. Jeppson) at 8:40 AM