The Archives at Independence Park have yielded yet another discovery related to the history of American archaeology! The Park’s buried cultural resources were used in the early testing of geophysical surveying methods for archaeological research!

These methods --which are a routine part of practice today – involve the use of non-invasive, non-destructive, physical sensing techniques that detect buried archaeological evidence. The resulting underground 'site imaging' is useful for mapping archaeological remains as they exist in the ground. These geophysical studies also guide archaeologists in planning their excavations. More recently, the resulting map images are employed in interpreting historical landscapes to the public.

Correspondence archived in the Park’s Central Files (Box 23, Folder H22: Archeology and Historical Research - Independence Square) indicates that in 1961, Dr. Elizabeth Ralph, then of the Physics Research Laboratory at the University of Pennsylvania, requested permission to conduct surface tests and demonstrations "with a proton magnetometer and other archaeological searching equipment” on Independence Square.

Ralph is today credited with pioneering the use of geophysical surveying in American archaeology. Her research developed and improved several instruments for underground exploration. The archived Independence Park archaeological documentation indicates that she tested some of these devices, and trained others in their use, using the historical archaeology remains buried in Independence Square.

At the time, Ralph was researching the archaeological potential of geophysical methods then being used in the fields of geology, engineering, and mineral exploration. She experimented with electrical resistivity instruments that used wave projections to detect metals in the ground (metal detecting) and seismic detectors that employed wave propagation to find soil layer changes. She advanced archaeology's use of sonic detectors and magnetic contrast research, building upo 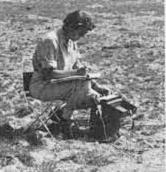 n nuclear science research that had led to the development in Europe of proton magnetometers and varian rubidium magnetometers. These instruments allowed for “archaeological prospecting” by measuring very small energy level changes in protons when they are subjected to magnetic charges. (Click on this circa 1965 image of Ralph to link to The Electronic Detective and the Missing City, an article written for Expedition [Winter 1965, 7(2):4-8], the magazine of the University of Pennsylvania's Museum of Archaeology and Anthropology. Ralph went on to become Director of the Museum's Applied Science Center for Archaeology).
Ralph's magnetometer studies were designed to pick up magnetic contrast readings between ancient buried walls and the earth around them. She crossed paths with the archaeology in Independence Park in 1963, when, in preparation for Old World (European-based) research, she tested instruments, and trained their operators, using the buried ruins of colonial and federal era America. 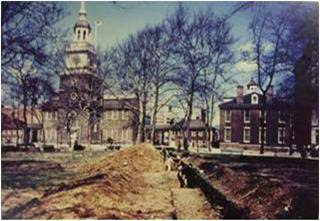 (Photo: Archeological test trenching at Independence Square in 1959. Early excavations at the square provided information about the historical landscape south of the State House [Independence Hall]. [Image: INDE Archives].)
Letters archived in the Central Files record that Ralph was provided with park archeology maps and drawings to assist her in her equipment testing. These documents detailed the locations of 18th and 19th century house walls and garden pathways, and late 19th and early 20th century utility pipelines. These had been discovered in the 1950's during archeological investigations at Independence Square.
It is unknown at this time (at least as far as my cursory research indicates) whether Ralph’s instrument testing at Independence Park produced any additional research findings. This may have occurred -- although her objectives involved determining whether the instruments could reliably re-locate already identified features. And if so, it is quite possible that any results were not recorded for historical archaeology’s sake: Beyond being another kind of specialist, there was no field of historical archaeology yet in 1963--although historical sites had been investigated archaeologically for decades for historical architecture needs (even recently in the creation of Independence Park), and the first Conference of Historic Sites Archaeology had only just met for the first time (in 1962). The archived correspondence does report that Ralph offered her assistance to the Park archaeologists. If early geophysical findings do exist from this time they could be of use to present day archaeological recovery efforts at Independence Square.
Today geophysical studies are commonplace in archaeology, including at historical archaeology sites in Independence Park. For example, ground-penetrating radar studies were undertaken in recent years at both Independence Square and the Deshler-Morris House property prior to restoration/renovation activities. Systematic collection of geophysical data for spatial studies has also included the use of other new technologies: In 2007, a geospatial laser survey was used to record the excavated ruins discovered at the President’s House site.

(Photo, top: Kitchen sub-cellar, President's House complex. Bottom, 3D laser scan survey image made by Erdman Anthony company [ Photos: Jed Levin, INHP].)
Beyond the park boundaries, geophysical archaeological studies make use of drones and satellites to conduct infra-red and other light spectrum scanning that penetrates the earth’s crust (and the forest canopy) to locate evidence of past human activity (e.g., roadways, trade routes, lost cities, sunken cities).
Such options were yet to be imagined when, in October 1962, the journal American Antiquity reported on “new developments in [archaeological] field and laboratory research” from Independence Park. This included a notice that “the first extensive field tests following preliminary testing at Independence Square, Philadelphia, were made of a new sonic echo underground searching device developed by Elizabeth Ralph and her associates at the Physics Department at the University of Pennsylvania” (emphasis mine). This same "Current Research" column also remarks on the implementation of the new method of “sonic cleaning of ceramic and glass pioneered by B. Bruce Powell and Jackson W. Moore for the National Park Service at Independence Hall" (sic). I blogged on this other Park 'First' in July after coming across archived correspondence related to experiments with ultrasonic cleaners for the processing of archaeological artifacts.