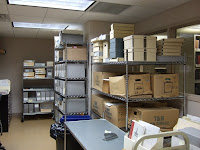 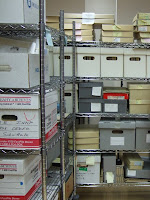 "Don't do anything that can't be undone". This could be a motto for work done in the archives. The Archivist summed up my introduction to the project this week with these wise words of advice. This was just one of the important things I learned during my orientation.
That first day began with all the necessary basics. Safety issues were addressed (fire exits and extinguisher locations) and paperwork was signed (e.g. volunteer hour tracking sheet). Expectations were shared, confidentiality aspects were recognized, and appreciations (sent in both directions) were expressed. I was introduced to the other volunteers and to Bert, the Archives mascot (see sidebar image).

Then work began in earnest with a review of the existing 'working files' for building a finding aid for the INDE archaeology records. Several volunteers overtime (between 2000-2005) have laid the foundations for this project by organizing hundreds of folders full of archaeological site information. Photographs and maps were pulled for re-sleeving in archive-quality materials or for flat curatorial-standard storage. Dozens upon dozens of boxes were inventoried to find out what specifically they contained. With this overview of previous efforts (re achievements) I gained some understanding about the levels of scale of cataloguing that are involved in organizing the records in this repository (e.g., box lists, shelf lists, control files, central files, series storage locations, finding aids).

I also learned about some of the guidelines directing the archives work and which will also be used for generating the finding aid ...for example, Directors Order 28 (NPS Records Management), Park archaeology standards produced by the NPS Records Management Program, and the 2008 NPS Museum handbook Appendix D, Part II (pages 126-141, Manuscripts and Archives 'How to do it').

It was determined that I will first get some hands-on practice by dipping my toe into the different levels of scale of archival processing. This will involve processing some items that need to be brought into the archive system. These are stored at the moment on 'Truck 23' -- a massive rolling set of shelving in the 'Archives Storage' area. Among other items, 'truck 23' contains some 1970s-era field documentation for the City Tavern excavation that was recently transferred from Temple University and also some records for a project undertaken in conjunction with a sprinkler system added to Independence Square. These records had been previously housed in the Park's museum collection.

I will begin my work by drawing up box lists for this field documentation (creating an inventory of the items in each of the boxes). While at it, I will identify curatorial issues (photos needing re-sleeving, maps needing to be pulled, etc.), note any duplicates of files, and consider whether these records could be intra-filed in extant stored collections. I will also take notes for characterizing the nature of the records for use in the forthcoming finding aid.

Photo: The "Archives Processing" room where I will be working. Right, part of 'truck 23' with materials awaiting processing. Photos by P.L. Jeppson
Posted by V-I-P Archaeologist (Patrice L. Jeppson) at 8:03 PM