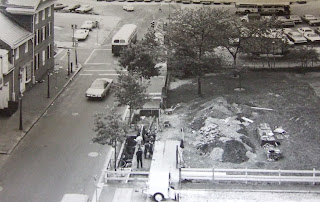 I have started tackling my first box of archaeological records for this summer Archives project. The materials relate to an excavation undertaken in 1974 on a strip of sidewalk on the West side of 2nd Street, near Walnut, in Old City, Philadelphia. (Photo above, view South. Excavation mid-photo.) The dig was in advance of Independence Park's recreation of City Tavern, an establishment built 1772-73 that served as an important gathering place for social, political, and economic leaders. (See City Tavern History .)

City Tavern was partially burned in 1834 and was demolished in 1854. The site was built on again and that subsequent construction was, in turn, torn down sometime after 1960 (presumably when the park acquired the land). In building Independence Park (circa 1960s-70s) a plan was made to recreate the tavern. Toward that end extensive historical and architectural research was undertaken. Part of this preparation included contracted archaeological research at the property to be built upon. This work was done by a team from Temple University's Anthropology Department under the direction of researcher Dan Crozier.

In this 1974 photo you can see the property with a City Tavern historic marker sign, taken prior to the archaeological fieldwork and prior to the construction of the tavern on the property (View West toward the Merchant's Exchange Building. Folder 11, color slides 1, row 1, column 1). This image (another view looking West) is a modern Internet photo of the City Tavern structure that was recreated at this location. City Tavern is a famous restaurant serving 18th century dishes created by culinary expert Walter Staib.

In compiling a 'box list', or inventory, for this batch of records, I examined D. Crozier's exceptionally fine field log where he recorded daily activities taking place on site. I also evaluated the associated site maps and photograph collection flagging any items that are glued in place. The adhesives in use 40 years ago can sometimes now be unstable.

During the examination of the field log I read some interesting 'corridor talk' (insider tidbits) about visitors to the site, including a news team which aired a story about the excavation. The public was interested in archaeology excavation then too! Crozier notes on May 21st that a back hoe operator who was 'driving by' helped to back fill the site.

I have yet to peruse the final report for this project but in viewing the photographs I was struck by the limited extent of the excavation at this property prior to construction. The sidewalk area - the region of the front of the building -- was focused on. This would firm up the position of buildings fronting 2nd Street. More to follow...
Posted by V-I-P Archaeologist (Patrice L. Jeppson) at 9:55 PM